Led by the Department of Physiology, Anatomy and Genetics (DPAG) and Kavli INsD Professor Richard Wade-Martins, Oxford Parkinson's Disease Centre (OPDC) has been awarded a £3.8 million Wellcome Trust Collaborative Award to study the function of calcium in dopamine neurons, and how this plays a role in Parkinson's disease. Researchers at the OPDC, will be working on explaining how and why dopamine neurons are vulnerable in the disease and look at how they may be preserved. Professor Wade-Martins is joined by Professors Stephanie Cragg (DPAG) and Peter Magill (MRC Brain Network Dynamics Unit, Oxford University), and colleagues Professor Birgit Liss (University of Ulm, Germany) and Professor Josef Kittler (University College London). 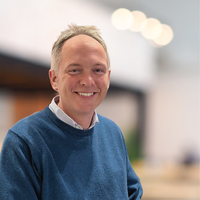 “I am delighted to establish a new national and international collaboration and bring a team of scientists together to investigate the critical role of calcium in Parkinson’s. Calcium biology is so important to how a neuron functions, how it lives and how it dies, and may hold the key to preventing cell death. Our team is very well-placed to develop novel insights and I look forward to starting this exciting work.”

Researchers at OPDC seek to understand how calcium enters and is handled by cells in order to generate electrical and chemical signals, and how calcium-linked processes get wrong in Parkinson's disease. Using a multidisciplinary and collaborative approach, they can better understand why these nerve cells are so vulnerable and how they can prevent them from dying.

Professors Cragg, Wade-Martins and Magill were also awarded £6.6 million in October 2021 by the Aligning Science Across Parkinson's (ASAP) initiative to map the original brain circuits vulnerable to Parkinson's.

Since April 2021, Oxford University's KAVLI Institute for Nanoscience Discovery is proudly serving as a hub for research groups from seven different departments spanning both the medical and physical sciences, including Professor Richard Wade-Martin's Group from the Department of Physiology, Anatomy and Genetics.