Establishing preclinical models of Alzheimer’s that reflect in-life clinical symptoms of each individual is a critically important goal, yet so far it has not been fully realised. A new collaborative study from the University of Oxford has demonstrated that clinical vulnerability to an abnormally abundant protein in Alzheimer’s brain is in fact reflected in individual patient induced pluripotent stem cell-derived cortical neurons. 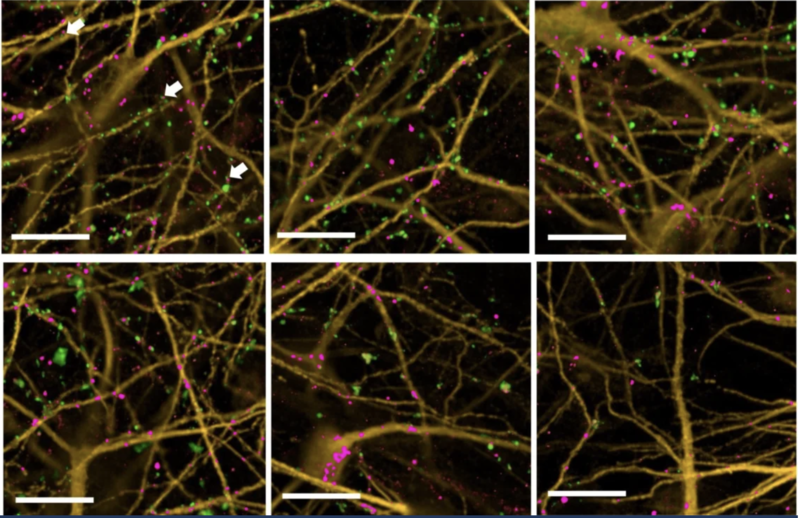 Synapses, shown as green and pink dots, represent points of communication between neurons, grown here in the laboratory from stem cells. The study found that neuronal cultures from some Alzheimer’s patients were more resilient to synapse loss after exposure to amyloid protein than others, reflecting in-life clinical symptoms.

Patient-specific stem cells are key to understanding Alzheimer’s. Researchers can turn stem cells into brain cells, which are not easily accessible from living patients, in the laboratory. One of the major challenges in studying these brain cells has been to model pathological changes characteristic of Alzheimer’s brains in the majority of patients who do not harbour genetic mutations that cause disease.

To tackle this issue, a collaborative study involving researchers from the University of Oxford and the clinical team from the Deep and Frequent Phenotyping cohort of early Alzheimer’s utilised blood samples donated by fourteen Alzheimer’s patients from multiple centres around the UK. The researchers converted the blood cells into stem cells before generating brain cells specific to each individual donor. Researchers then challenged these brain cells with toxic amyloid-beta - a key pathological protein in Alzheimer’s - to cause synapse loss. A loss of synapses – the junctions where brain cell communication takes place - is the strongest correlate for cognitive decline in Alzheimer's.

The team found that the extent of synapse loss varies among individual patient brain cell lines, and crucially, correlates with their clinical symptoms, such as cognitive decline or brain activity, given their varying levels of amyloid-beta burden in the brain.

First author, Dr Bryan Ng from Professor Richard Wade-Martins’ group, said: “We are excited to have found that brain cells generated in the laboratory from individual Alzheimer’s patients reflect their clinical vulnerability to amyloid-beta. This will help us better understand mechanisms of resilience and will help in the search for new therapeutic strategies”.

Collaborating University of Oxford departments include DPAG, the Kavli Institute for Nanoscience Discovery, the Nuffield Department of Clinical Neurosciences, and the Department of Psychiatry.

Since April 2021, Oxford University's KAVLI Institute for Nanoscience Discovery is proudly serving as a hub for research groups from seven different departments spanning both the medical and physical sciences, including Professor Richard Wade-Martins from the Department of Physiology, Anatomy and Genetics.